Roller bearings are durable and robust machine elements whose service life can be well estimated by means of a standardized calculation. Provided that the bearings are correctly dimensioned and operated, the material fatigue included in this calculation is therefore only the main cause of very few roller bearing damages. The failure of a bearing due to material fatigue is generally very rare and usually triggered by other factors that cause pre-damage to the bearing. Measured against all bearings in use worldwide, depending on the literature, only two to five per thousand of all bearings fail prematurely, i.e. before the calculated service life.

Within this small quantity, the causes of failure are statistically distributed as follows:

Summary of the most common causes of bearing failure

This data shows how important it is to extensively analyze bearing damage and its causes in order to be able to derive measures for future prevention. Following a fact-based analysis, corrections to the lubricant, sealing, or mounting sequence are often sufficient to significantly increase the service life of bearings.

The aim of a bearing inspection is to determine the cause of a failure. Such an investigation should be entrusted to experienced internal staff or, even better, to the bearing manufacturer or another qualified third party. The experts from the manufacturer or the external laboratory have experience with bearing failures and have a broad knowledge base through similar failures on other machines or applications. The chapters below explain the tasks of the bearing user and provide an overview of typical bearing damages and signs of wear.

Securing bearings and their operating data

The following questionnaire is based on VDI Guideline 3822 and has been compiled on the basis of many years of experience in the field of damage analysis. It shows the most important steps for recording the operating data, handling the affected bearing, and the procedure for analyzing the operating materials. Compliance with the sequence of steps contained therein ensures that no important information is lost and that the analysis result is not impaired or influenced. All requested drawings and data must be made available to the assigned analyst. An on-site appointment is recommended so that the analyst can get a picture of the overall situation.

Inspection of the bearing in the installed condition (photographic documentation)

History of the damaged bearing

Please use our checklist for securing damaged bearings for detailed documentation.

Examination of the lubricant is an important part of the damage analysis. We recommend sending a fresh lubricant sample to the laboratory in order to better assess the used lubricant.

Collection of the lubricant sample depends on the type of lubrication. In the case of grease-lubricated bearings, sampling between the rolling elements is only possible when the bearings are dismounted. In the case of oil-lubricated bearings, it may also be possible to take lubricant samples in the installed condition. The samples must be taken from the oil sump and the bearing itself. It is important to stir the oil sump before sampling in order to obtain a representative sample.

Particularly large fragments or conspicuous contaminants as well as oil filter residues can be examined separately by a materials testing laboratory if their origin cannot be determined with certainty and they may have contributed to the bearing failure.

The lubricant and fragment samples or the results of the examinations must be made available for damage analysis.

When dismounting the rolling bearing, it must always be ensured that the damage pattern is not obscured by damage caused by the disassembly. The bearing must be dismounted carefully and cautiously. If disassembly damage cannot be avoided, it must be identified as such and reported to the analyst.

The following procedure must be followed:

Before the bearings are sent to the manufacturer or a qualified third party, the bearing must be inspected in an uncleaned and assembled condition.

The following characteristics must be checked and documented photographically and in writing:

When shipping the bearing parts, the following points must be observed:

For more information on the packing of damaged bearings click here.

In a rotating bearing, the surfaces that are in contact gradually become matt. These marks are normal. They are referred to as running marks. The running marks can be used to draw conclusions about the operating conditions of the rolling bearing. The following table shows typical running patterns for radial and axial bearings (outer ring = housing washer; inner ring = shaft washer). 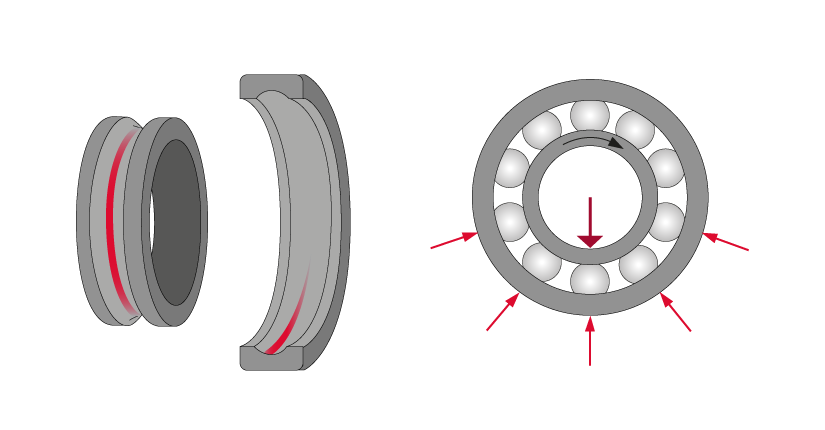 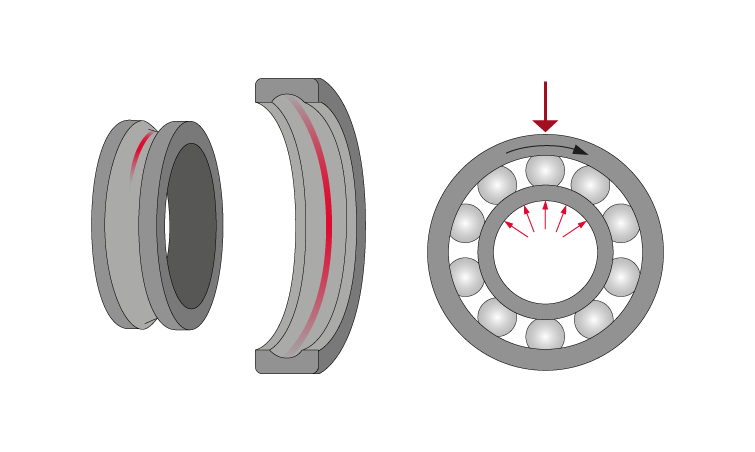 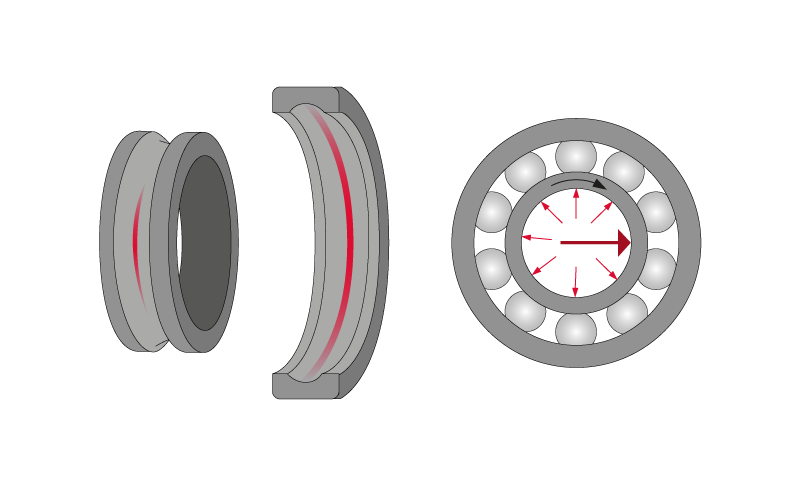 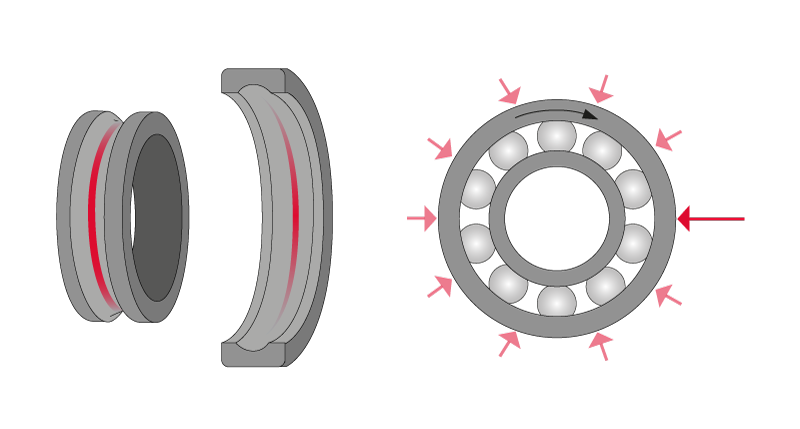 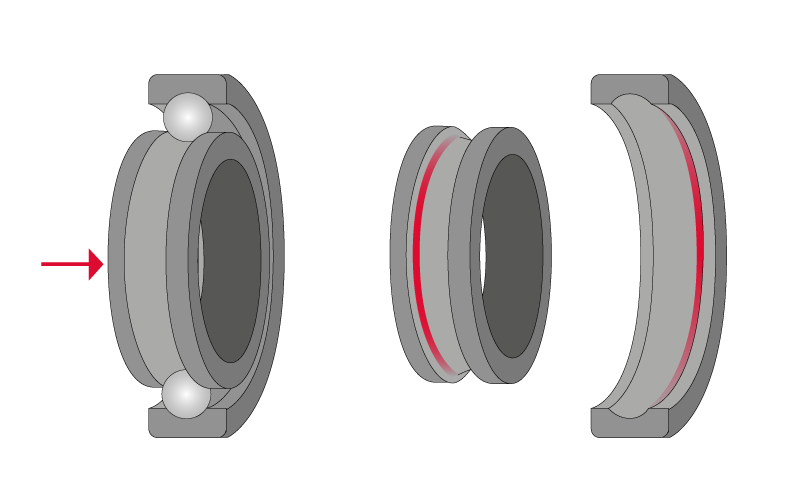 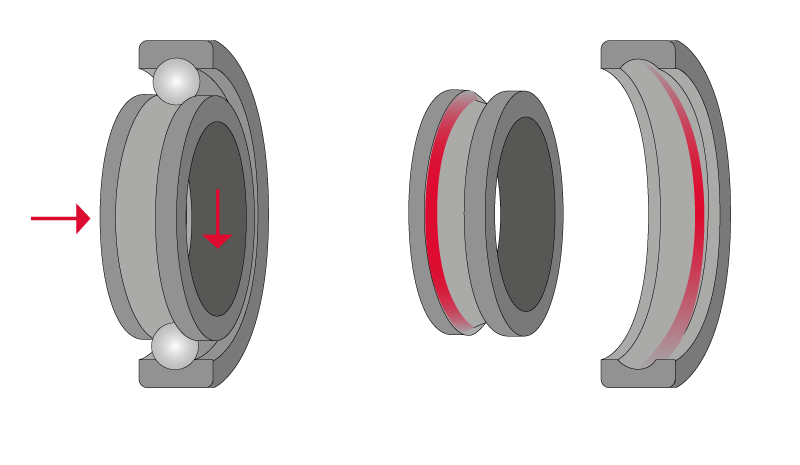 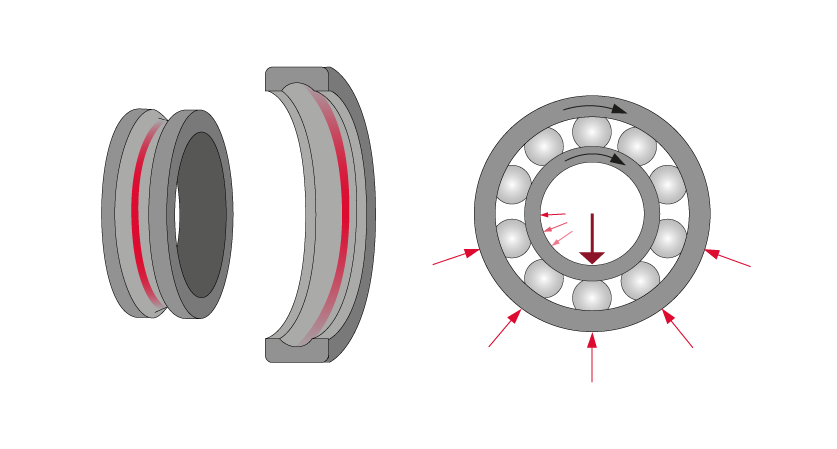 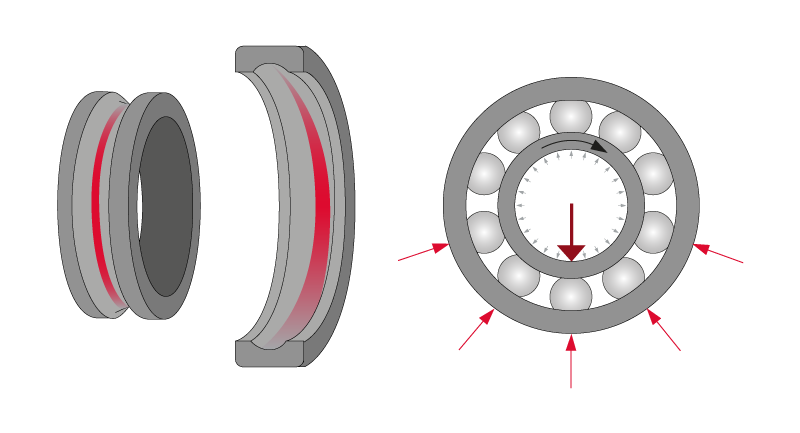 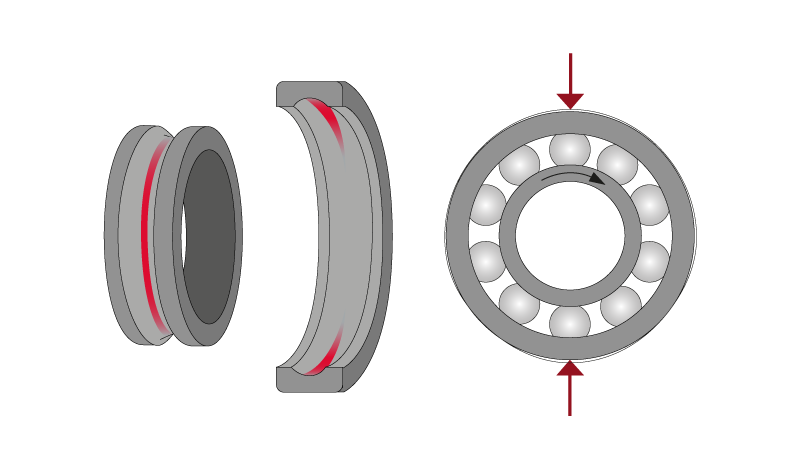 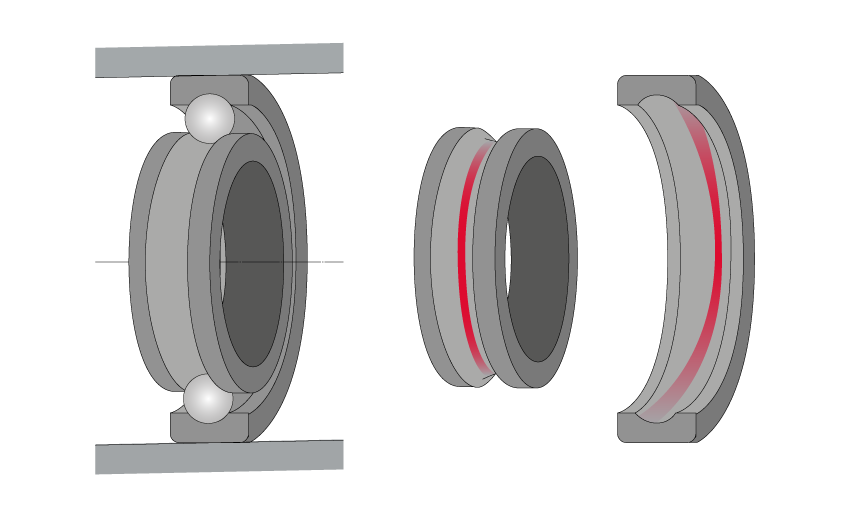 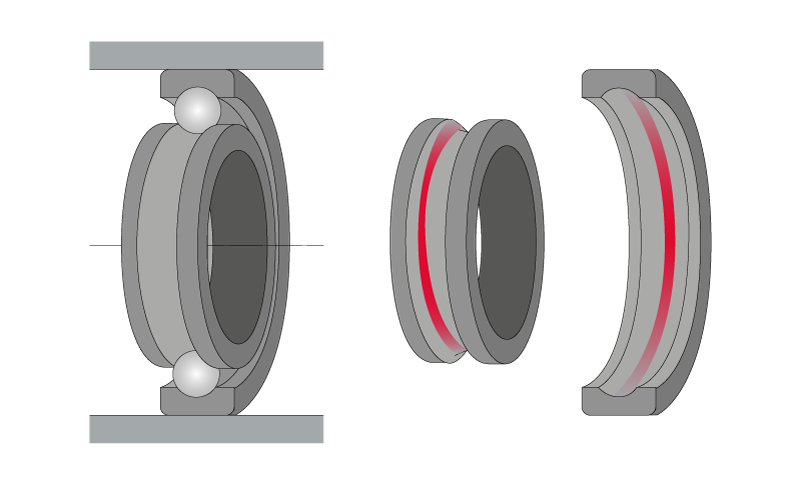 The most important types of bearing damage are shown below. The damage patterns described are often indicative of a particular cause of damage. However, often not only one of the described damage patterns can be found. In many cases, several successive wear mechanisms lead to an overlapping of damage patterns, and it is not uncommon for the division into causal damage and consequential damage to be determined only by means of exclusion. Extensive information on this subject can be found in ISO 15243 (Bearings - Damage and failures - Terms, characteristics and causes). The damage patterns used here were also adopted from the standard.

The damage is presented as follows:

Indications of bearing damage and its causes 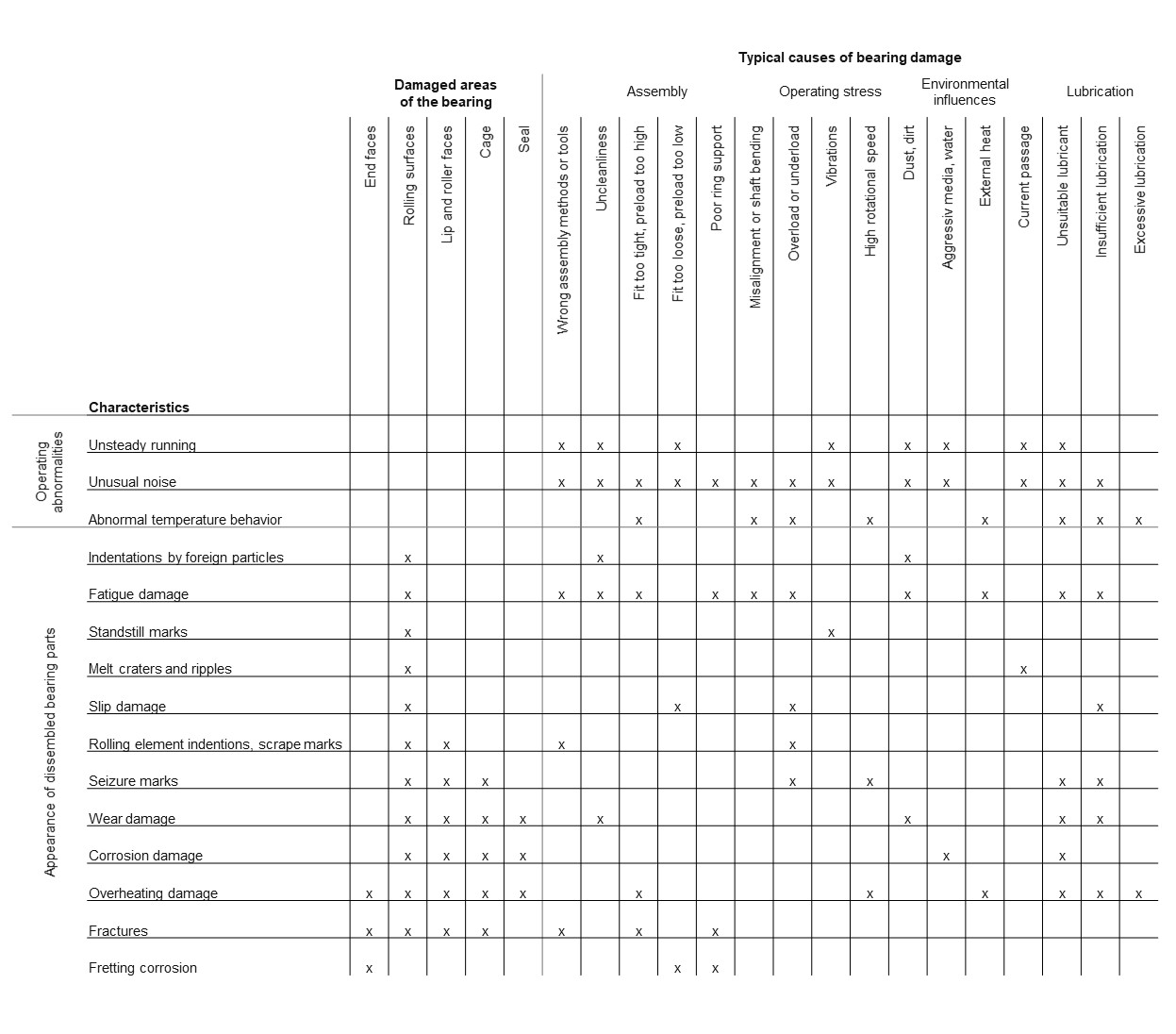 A microstructural change takes place in the material of the rings and rolling elements due to the stresses prevailing in the loaded bearing. Based on Hertzian pressure, these defective microstructures cause micro-cracks below the surface. This material fatigue is the basis for calculating the service life according to ISO 281. As fatigue progresses, plate-like particles break out on the raceway surface. The following image shows the course of fatigue due to overrolling of foreign particles that can be seen on the surface. 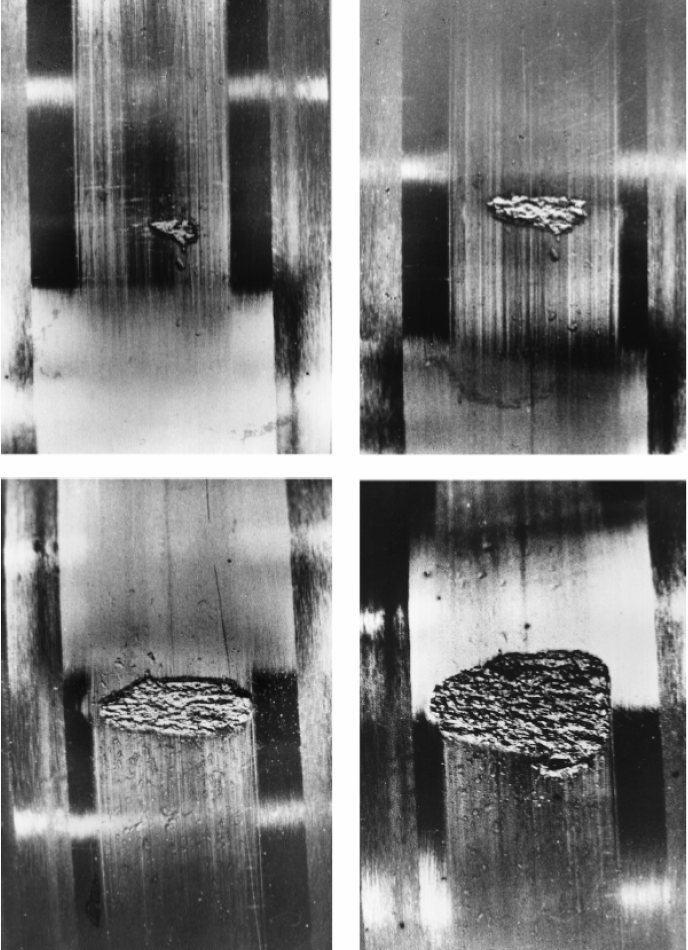 Adhesive wear refers to the transfer of material between two surfaces. Frictional heat is generated in the process, which can lead to renewed tempering of the microstructure or hardening of the surface. The resulting phenomena are also referred to as smear marks or seizure of the contact partners. 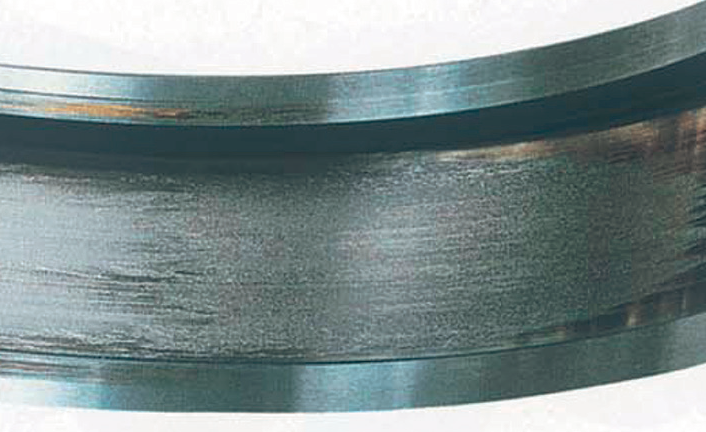 Wear on the outer ring of a cylindrical roller bearing 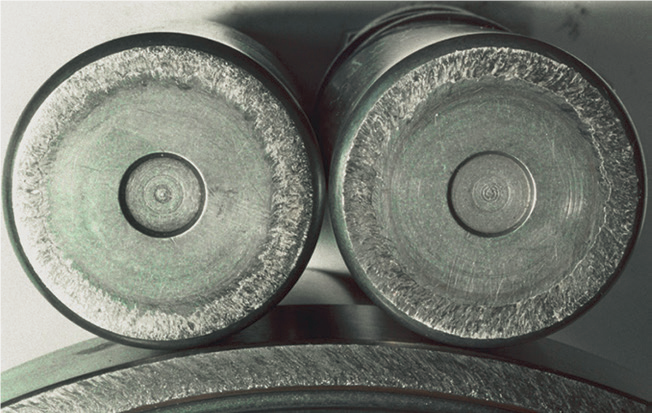 Wear at the roller-lip contact in a cylindrical roller bearing

Corrosion is a chemical reaction of the metallic surfaces of a bearing with another substrate (e.g. water or acids). Corrosion in bearings is divided into the following four groups: 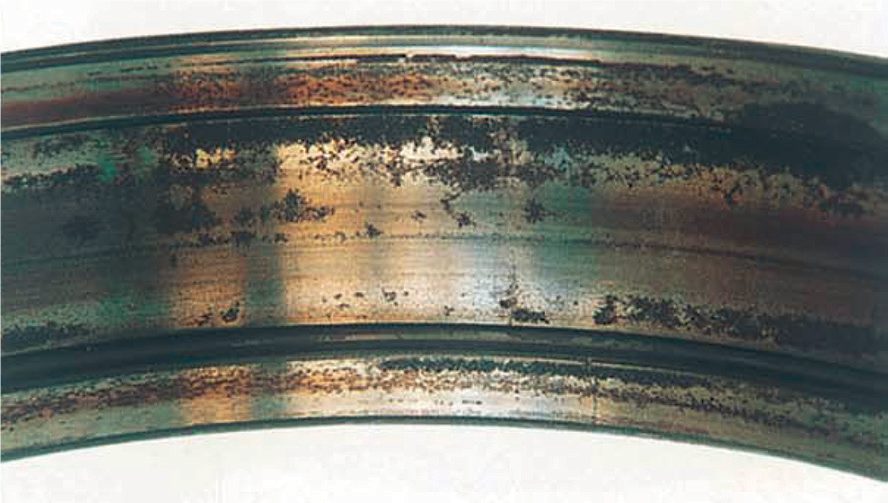 Rust on an outer ring of a cylindrical roller bearing

The following figure shows a special case of moisture corrosion, which is called contact corrosion. A characteristic sign are corrosion marks in the distance between the rolling elements. This is caused by condensation of atmospheric moisture after operation. The condensed water collects at the contact point of the rolling element and the raceway and produces these distinctive marks. 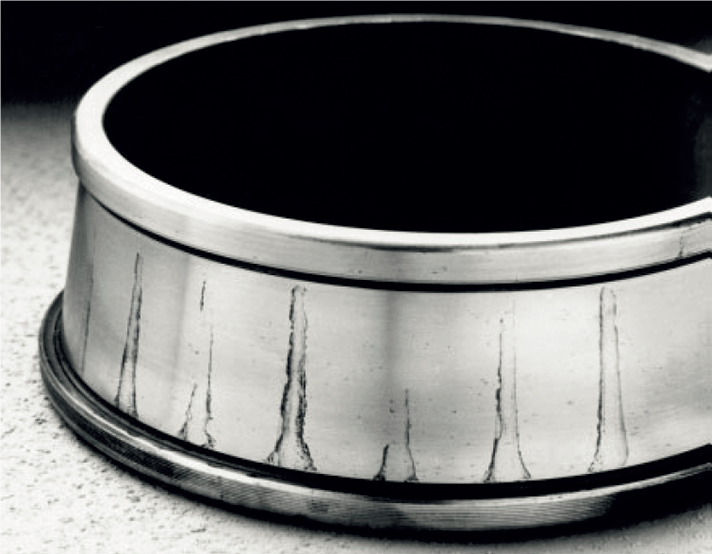 Fretting corrosion – also called frictional corrosion – is caused by micro-movements between the rolling bearing ring and the shaft or housing in the presence of corrosive media. 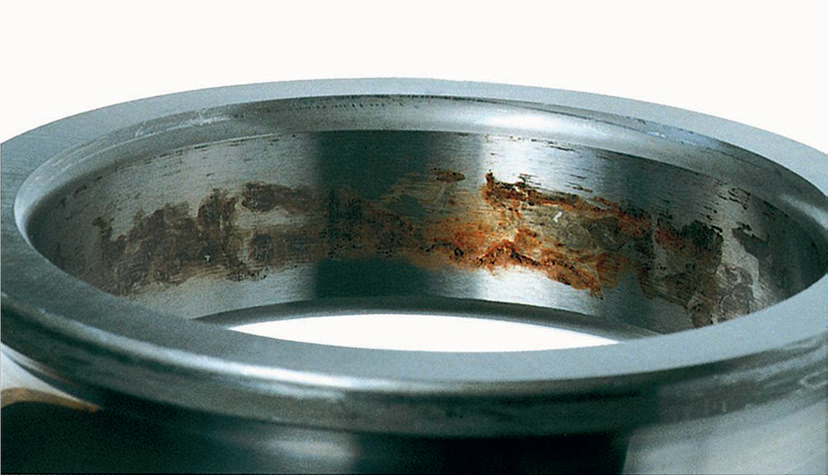 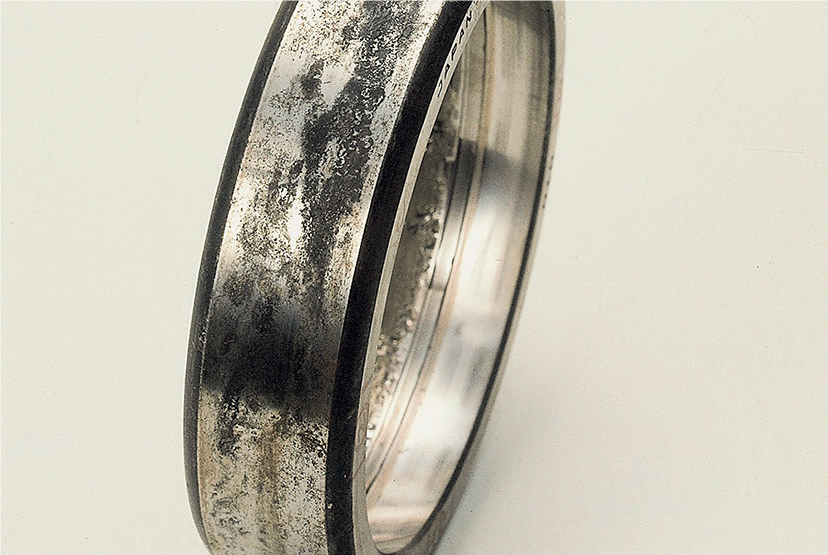 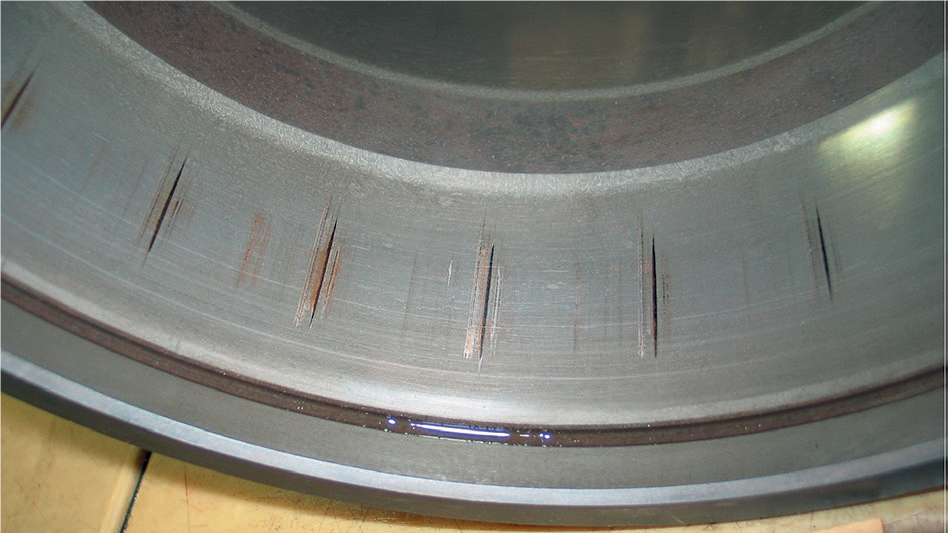 False brinelling on the outer ring of a tapered roller bearing 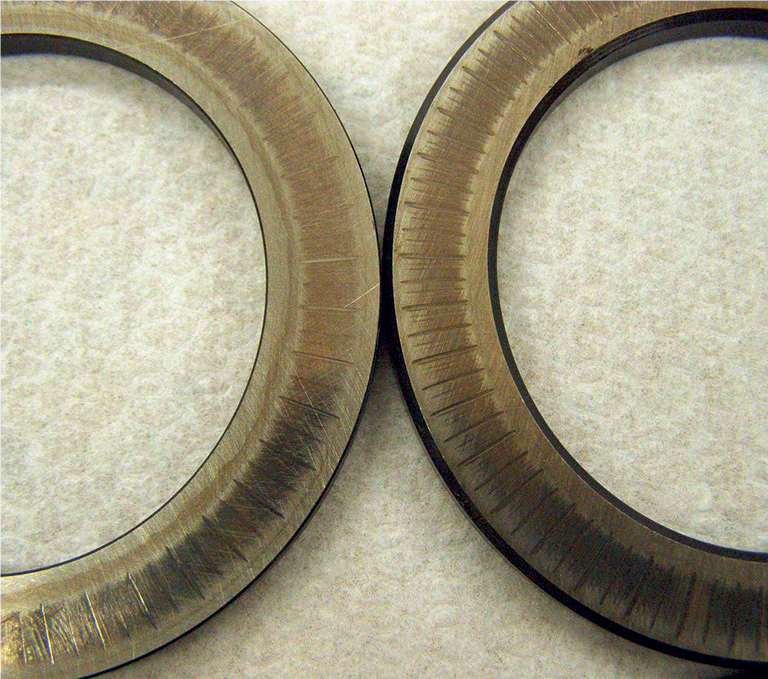 Damage due to passage of current

Current passage in the bearing leads to localized microstructural changes and chipping on the surface. If the current passage is generated when the bearing is at a standstill, so-called electrical pittings appear on the surfaces of the rolling elements and rings. Microscopic examination of the pittings reveals the typical fusion craters for this type of damage. Welding on the shaft with the ground contact on the housing is a typical cause of such damage. 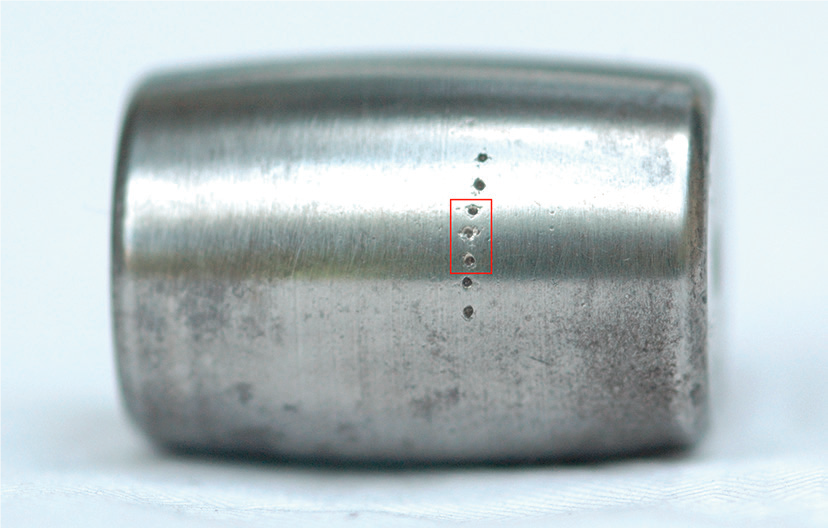 Pitting due to passage of current on a barrel roller 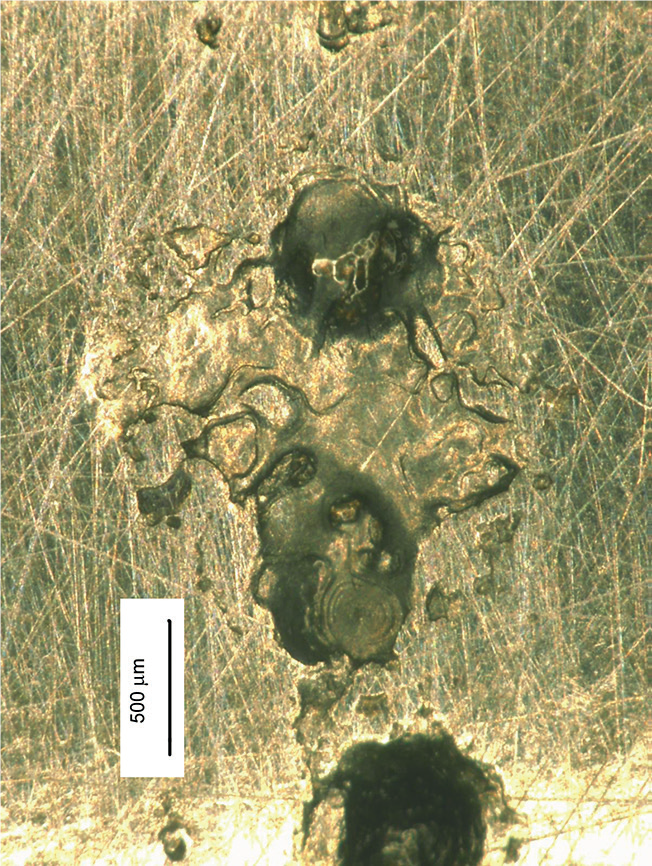 Melt craters on the surface of a rolling element

If current flows permanently through the rolling bearings during operation, a different damage pattern can be observed. Grooves are formed, which occur at short intervals over the entire circumference of the rotating ring. The rolling elements have a very dull and cloudy appearance. Such damage usually manifests itself in electrical machines. It can be counteracted by electrically insulating the rolling bearings with ceramic coatings or by using hybrid bearings with ceramic rolling elements. The following illustration shows the damage mentioned. 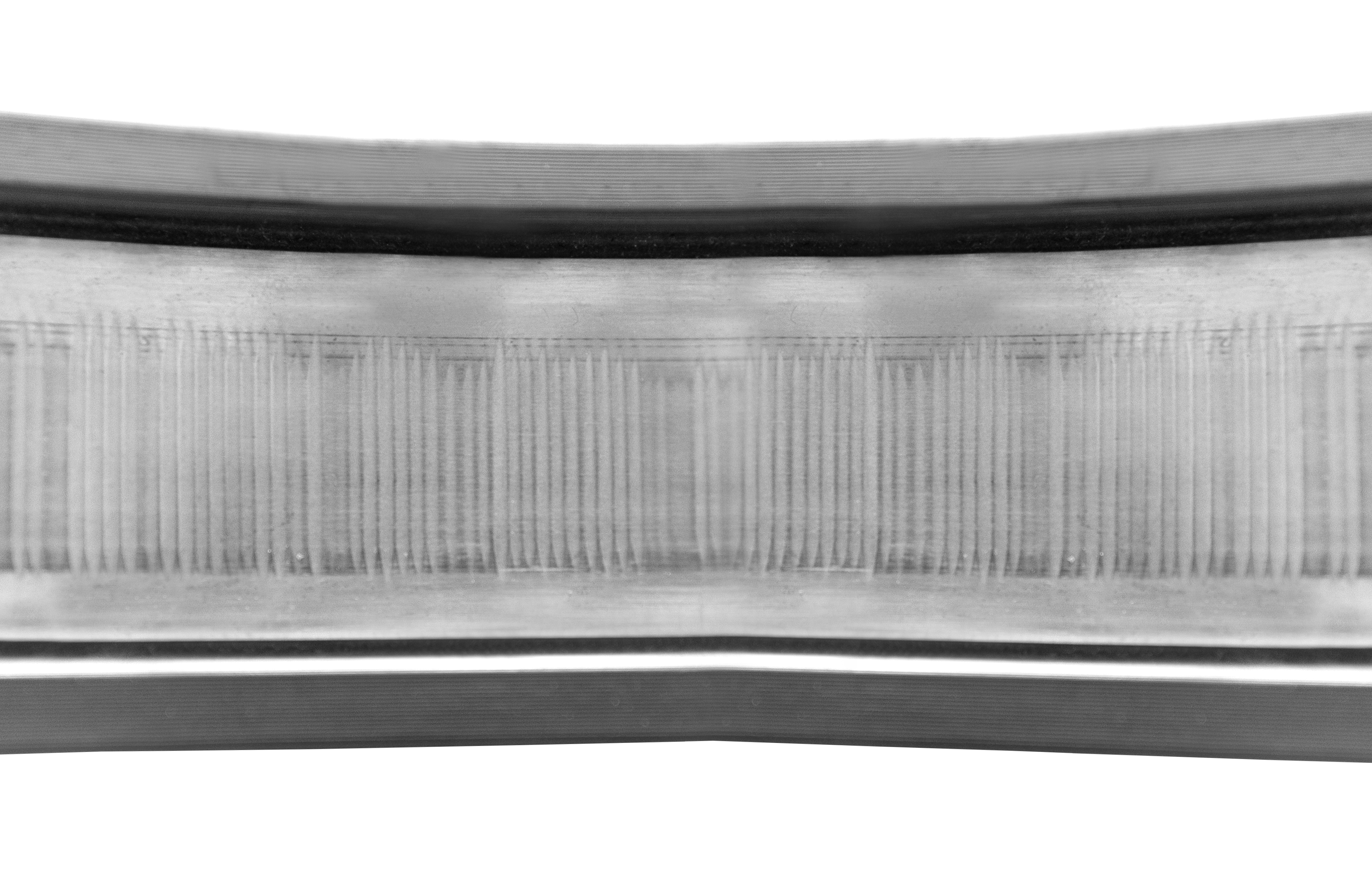 Deformation due to an overload in the macroscopic range is usually associated with a  static case or with an impact-type load. In this case, rolling bearing components are severely deformed. Typically, such damage occurs in the event of improper assembly and disassembly or an incorrect static design. 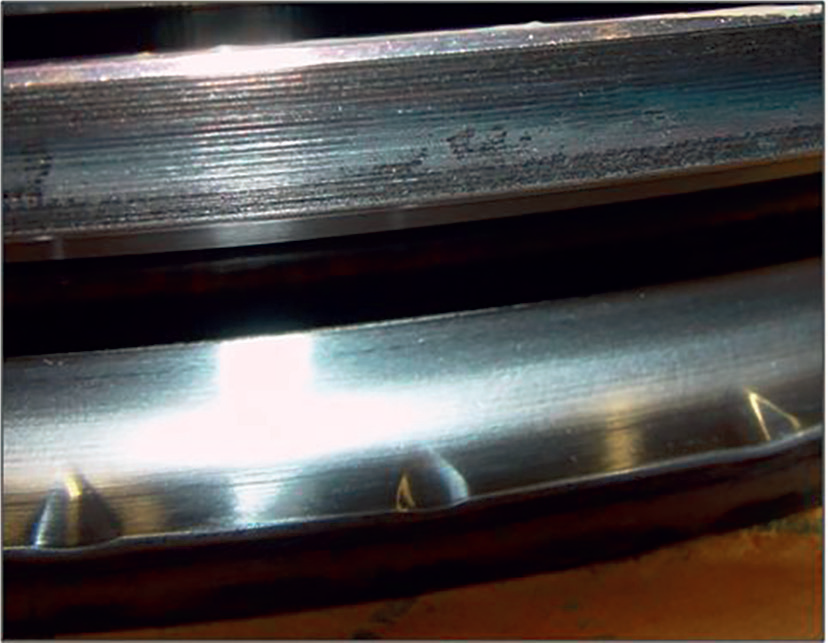 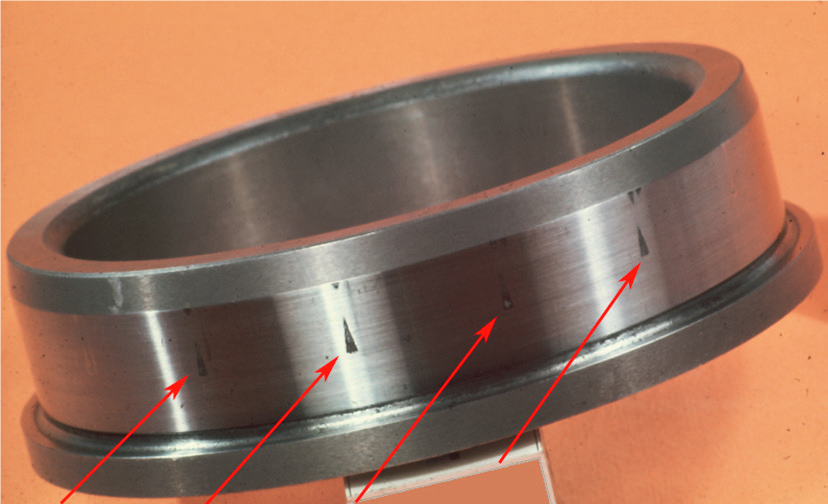 Damage due to improper assembly of a cylindrical roller bearing

When cycling over foreign particles, the rolling bearing material is also overloaded (true brinelling). The shape, depth, and edge areas of the craters give an indication of the material that has been cycled.

The following illustrations show the typical damage caused by cycling. 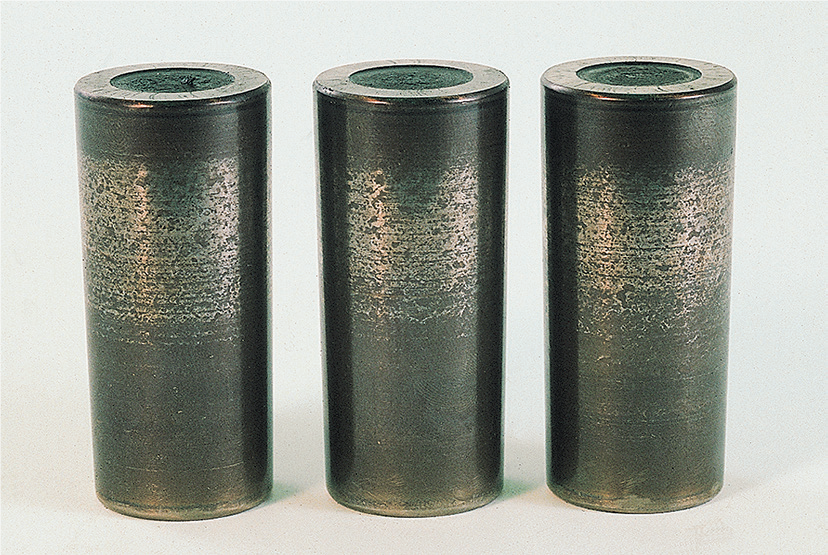 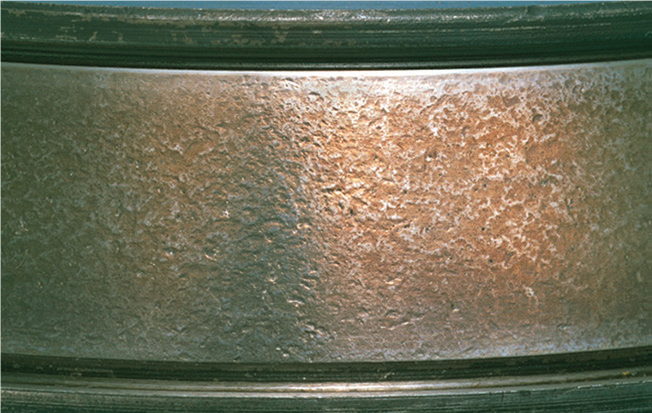 Cycling marks on the inner ring of a tapered roller bearing

If a rolling bearing component breaks, it has been heavily overloaded. A distinction is made between breakouts (macroscopic) and separating fractures. Breakouts usually occur with large axial forces in radial bearings. An axial longitudinal crack indicates a fit that is too tight. Lip breakouts in radial bearings can be avoided by axially supporting the lip. In the case of axial longitudinal cracks, the interference of the shaft must be reduced. If this is not possible, changing the heat treatment of the bearing (e.g. bainitic heat treatment) or case hardening the ring can improve the situation. 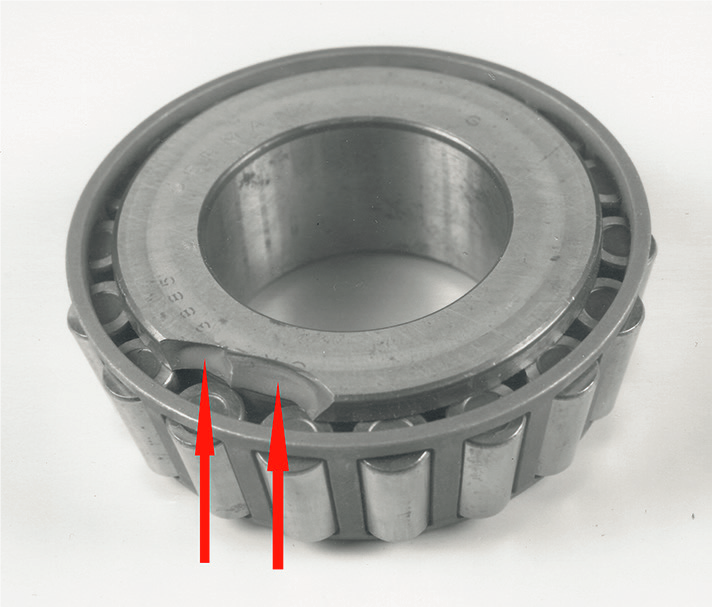 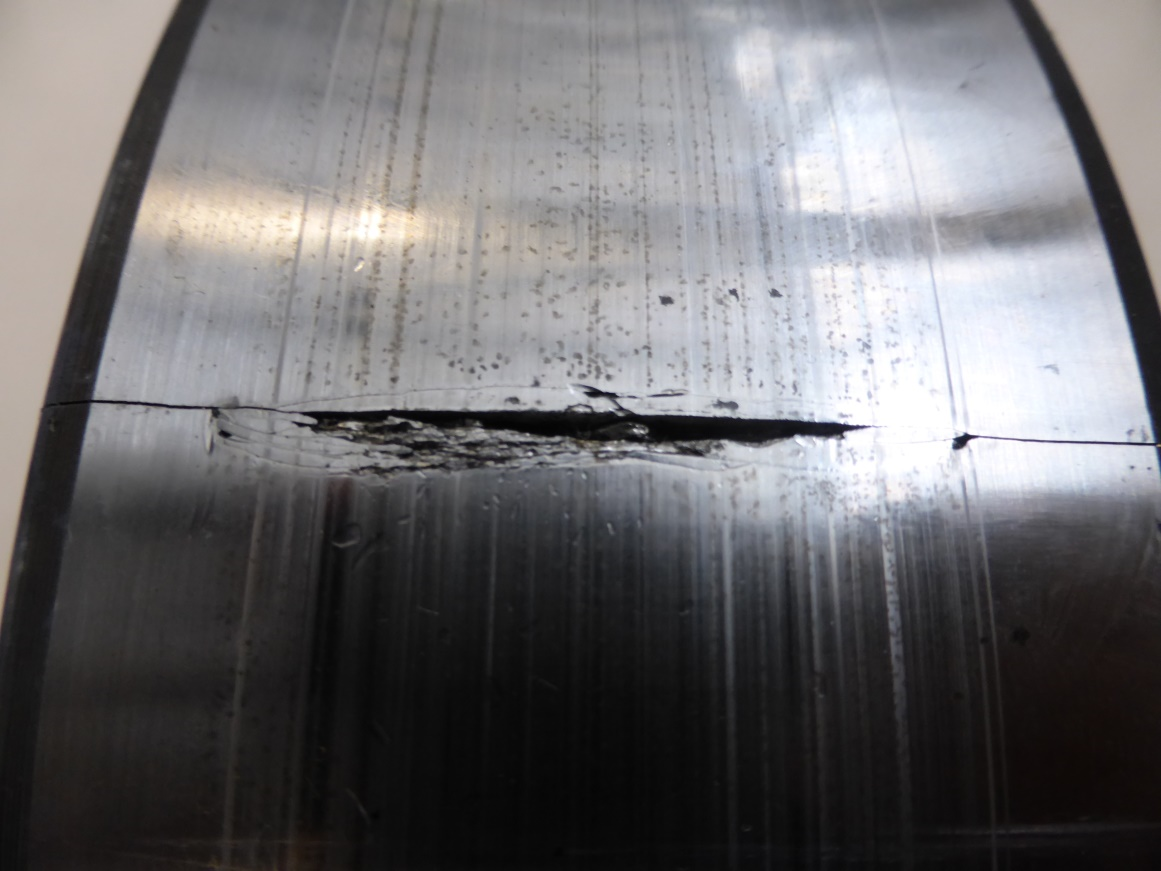 Large rolling bearings, as used for example in machines for paper production, coal preparation, or generally in heavy industry, are high-value economic goods. In addition to the interesting economic aspect, it is becoming increasingly important to conserve resources and use them sustainably.

In the event of damage or wear, it is often possible to recondition the existing bearing instead of investing in a new one. Particularly in the case of scheduled maintenance of large systems, the existing replacement bearing sets can be regularly and cost-effectively checked, often reconditioned and made available again in new bearing quality.

Dismountable bearings with an open cage design are generally easy to recondition economically. The following table provides an overview of the reconditionability of the designs.

In general, the existing damage pattern must not exceed imprints and cyclings of foreign particles. Bearings with incipient pitting or cracks often require a replacement of rings. Therefore, in these cases, reconditioning is not always economically viable.

The advantages of reconditioning are: