Track-bound rail vehicles represent a significant and constantly growing share in national and international transport. A high level of reliability and maximum stability are required. Safety plays a major role, especially in the area of passenger transport. Wheelset bearings are of particular importance in railway applications.

KRW wheelset bearings meet the highest quality requirements. In addition to 100 % traceability of all components up to the steel melt, all parts are subject to special non-destructive tests. After completion, each individual rolling bearing ring is subjected to an ultrasound test and magnetic particle test; rolling elements are checked using an eddy current test. The brass or polyamide roller bearing cages to be installed are also subject to several dimensional, functional and material tests. Aware of the high level of responsibility, each individual component of the wheelset bearing is checked for internal and external errors.

After the German reunification, our company developed from a long-standing supplier to the Reichsbahn into a reliable partner of Deutsche Bahn and many railway companies in Europe and abroad. Since 1996 we have been a Q1 supplier to DB and a developer and manufacturer of wheelset bearings in the possession ofmanufacturer-related product qualification (HPQ).

Cylindrical roller wheelset bearings are supplied by KRW as standard in accordance with DIN 620 and ISO 492 (rolling bearing tolerances) in normal tolerance (PN). All other - deviating tolerance classes or special tolerances - must be specified when ordering.

Cylindrical roller wheelset bearings are separable, non-self-retaining bearings that can appear in different designs. The bearing designs differ in the number and arrangement of the ribs.

The most common design combination is WJ and WJP. In addition, two WJ bearings are rarely combined or WJ with WU+HJ separat thrust collar. 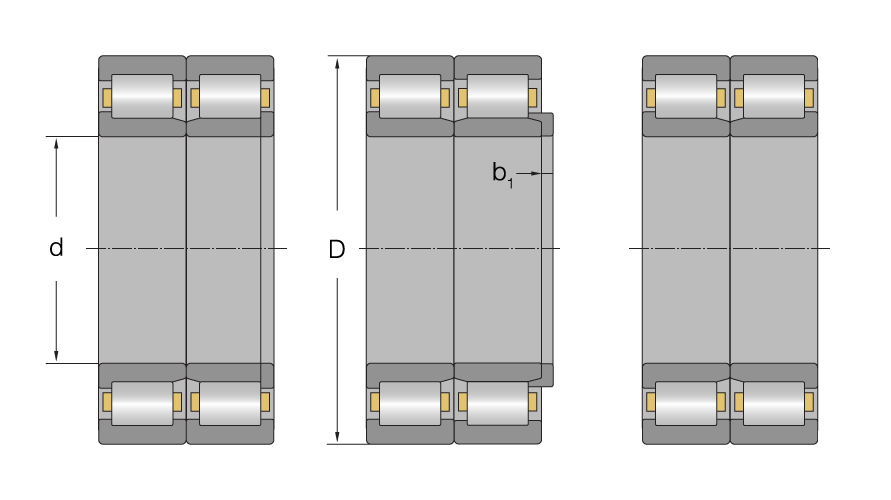 WJ bearings have two fixed ribs on the outer ring and one fixed rib on the inner ring.

WU bearings have two fixed ribs on the outer ring. The inner ring is ribless. By mounting a separate thrust collar (HJ) in WU bearings, the bearings can be combined to support bearings.

WJP bearings have two fixed ribs on the outer ring and a loose rib disc on the inner ring.

Cylindrical roller wheelset bearings can be supplied with cylindrical or tapered bore. In addition to the standardised gradients 1:12 and 1:30, the tapered bores also include the K4 cones used by the Deutsche Reichsbahn.

Cylindrical roller wheelset bearings are supplied by KRW as standard in accordance with DIN 620-4 and ISO 5753 (radial bearing clearance) in the standard clearance (C4), but are also available in all clearance classes with restricted clearance or special clearance.

At KRW, cylindrical roller wheelset bearings are equipped as standard with a one-piece, roller-guided glass fiber reinforced window cage (suffix: TVP) or with a solid brass cage (M3). Other cage designs are available on request or are selected for specific applications and marked accordingly on the bearing.