Spherical roller bearings are double row, angularly adjustable bearings which can compensate angular misalignments due to the spherical outline of the outer ring raceway and the barrel-shaped rolling elements. They absorb very high radial as well as axial forces, but they are not suitable for high speed needs. Spherical roller bearings cannot be disassembled and are suitable for use with heavy shaft deflections and angular misalignments between bearing positions.

The standard design by KRW (suffix: EA) is optimised for load carrying capacity. The double-chamber brass cage rests on the rolling elements that are guided by two outer flanges on the inner ring. Bearings with the suffix A have an additional solid centre flange. This design usually has a lower load rating, but it is significantly more suitable for applications with changing axial loads, high speeds or shock loads due to the additional guiding of rolling elements and cage. 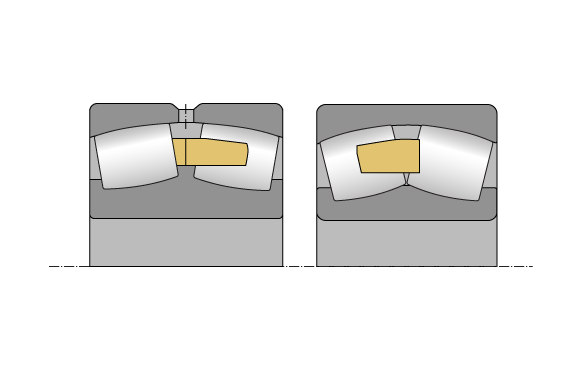 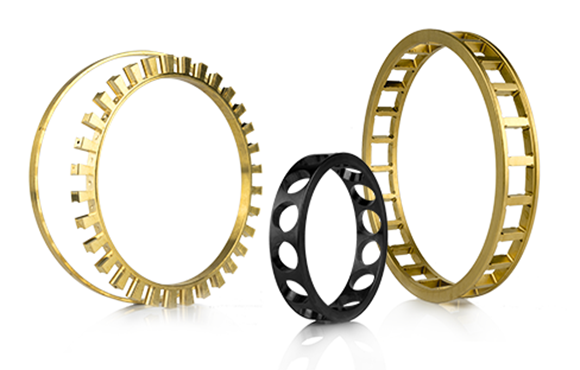 By default, spherical roller bearings by KRW are equipped with a rolling element riding solid brass window-type cage (suffix: M). Other cage designs are available on request or chosen for specific applications and labelled accordingly on the bearing.

Spherical roller bearings are suitable for compensation of misalignments between inner and outer bearing rings due to shaft deflections, angular errors and housing deformation. The maximal admissible angular misalignment with static and circulating inner ring is:

Deviating angles are available on request or custom-designed.

The equivalent bearing service life for the single row spherical roller bearings depends on the ratio Fa/Fr . The equivalent dynamic bearing load can be determined using the following formula: